Time to go to the park!

The weather has been beautiful.
I took lil G to the park twice last week
And so far twice this week!
Not long adventures mind you,
I don't have much stamina.
( I am happy that I've been getting out tho! Baby steps)

It's been great to enjoy a change of pace.
Today I took her cane.
This was a huge step for the mama.
I posted about it and shared a photo of it,
A few months ago.
It's hung on the entry closet knob since then.
Waiting for me to feel ready.
I had planned on us going to a park that isn't used much,
But we were greeted with a ," do not enter " sign where the grass had been sprayed.
So after much thought I took her to the best and most crowded park around.
I guess we got to jump in with both feet.
Nothing like a white cane to scream," my child is blind!"
Of course we got lots of looks, I'm cool with that.
The first time Id ever seen a child with a cane was in November when she had her evaluations,
(Remember that would've been only 2 months post diagnosis.)
It choked me up.

Can you believe we are now six months post diagnosis?!
One thing I noticed was how much she needed me in situations like today,
And how extremely important this process is.
Lil G will be 8 in November.
Eight year olds do not need to constantly hold their parents hands
and basically stand back and watch the other children playing.
My job is to prepare her to become independent,
And I need to start exposing her to environments that aren't familiar.

She also needs me to advocate for her,
something as simple as a yellow or even multicolored stripe
on the steps would give her independence.
She cannot tell with the wood slats where the steps are because there are so many grooves, the local playgrounds have so much that makes them accessible to different abilities, this would be an easy fix for the children with visual impairments.

I read an incredible book an orientation and mobility by Joe Cutter.
I also had a great packet of info sent to me by the Nation Federation of the Blind,
Along with her first cane.
They have a program called "young explorers".
Basically everything I mentioned above was provided free of charge.
She seemed to really enjoy using the cane at moments,
She is very strong willed tho and had moments where she Was. not. Going. To. Touch. It.
I took it all in stride and figure that one day she will enjoy the independence it gives her,
Instead of the familiarity and comfort she finds in holding my hand
and hearing My voice warning her about using her eyes,
be careful, pay attention, and "step!"

It was hard work, I am proud of her.
It's new and she took to it right away which was unexpected.
Here are some adorable photos.
(I know that's the only reason you follow along! ) 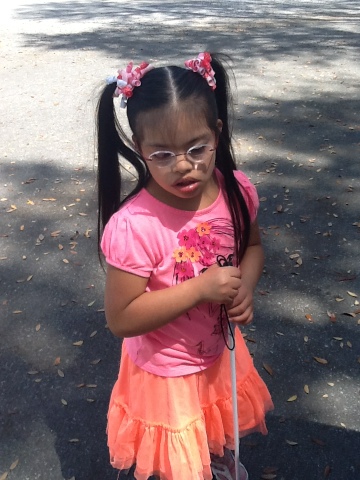 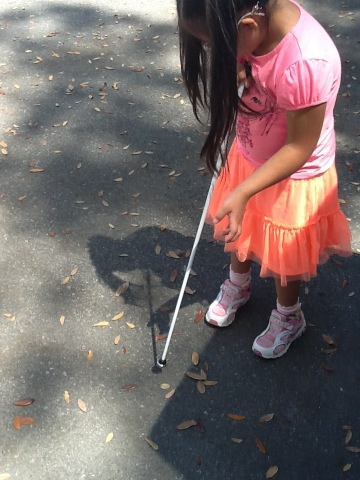 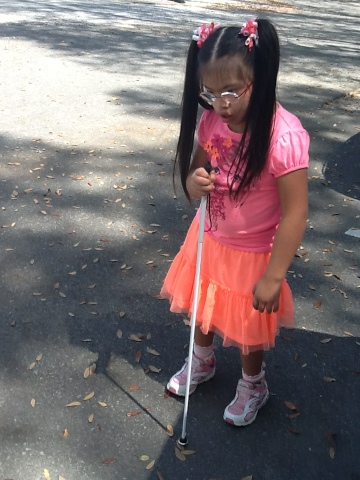 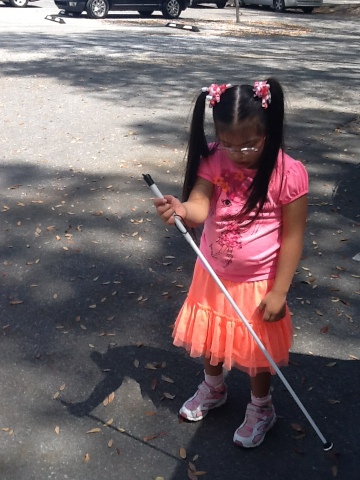