A good recipe or two, some pics too!

Breanna recently posted her hummus recipe on her blog and I thought Id share the Rachel R. recipe weve been making at our house for a month or so. Ive used both canned and dried/cooked chickpeas.(I feel more proud of my efforts when I use the dried and just cook two bags of beans at once. Make the hummus in 4 pts and freeze half) I read the comments and saw that many people commented on the low ratio of liquid so I want you to know that you need to use some of the water to keep it from becoming too thick. I havent had the coriander...... plus we doubled the garlic and cumin and used powdered red pepper to taste instead of red pepper flakes. Hope all this makes sense.( Many commenters felt it wasnt really spicy like the recipe says and recommended doubling the spices. We agreed after trying both ways.) I made the first few batches without the tahini, you can do it without it.... it is better with it I might add......

Next recipe, my girlfriend was making chocolate cinnamon rolls for Valentines and it seemed like such a great idea that I had to copy her. It had been many many years since Id made cinnamon rolls. I couldnt find Paula Ds chocolate ones but this recipe was just heavenly......

Spent the afternoon with my sister and her twins.
Grace had a blast.
They will be going to Korea this summer.
Im pretty sad about it. 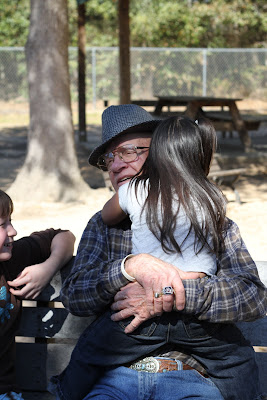 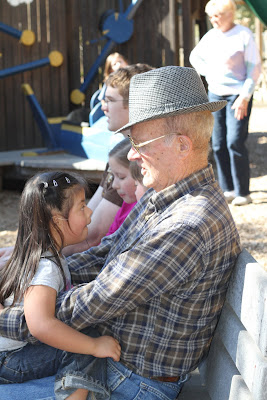 she shared these photos from our trip to the park a week ago. Little G iwth her great grandpa.
Posted by Anna at 4:08 PM