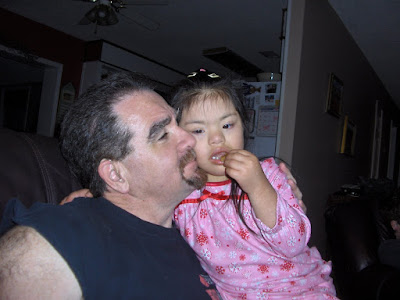 (G in jammies lovin on papa- she is Papas girl)
Our weekend trip plans were cancelled due to all the drama.
Both of N's cars are in parts in the driveway with 17yo and husband helping him
Moved oldest daughter back home
and I am tired to the bone.
I remembered that being home would allow us to attend our friend's son's memorial.
I dont know why I dont carry a box of kleenexes around
in the huge purse I've taken to carrying.
I was a mess. I guess it was seeing the hundreds of people
gathered to Honor the memory of T.
Plus seeing the impact his life had on others.
I couldnt understand his speech- His parents and those that spent a lot of time around him did.
They had some great stories to tell.
One of the musicians played "I'm 18" By Alice Cooper.
You see, T heard that song on or right after his birthday
and he loved it. His mantra from then on was "Im 18!"
He was proud of it and talked about being 18 and wanting to move out.
He has moved out- he went home.
I cried over that. He was really and truly like any other 18 yo.
I knew his love for pizza and soda, and learned about his love for our local roller derby ladies.
And how he enjoyed the Pep rally
days before his death because he was able to sit with the seniors
and see the cheerleaders, up close.
I saw video of him in an adapted chair on skiis
and learned of his love for skiing,
I knew how he loved to ride in the sidecar of the motorcycle
the feel of the wind in his hair and sun on his face.
The whole time we were there.
lil G was going back and forth
Mamas lap
Papas lap.
Kisses for mama
Kisses for papa.
Waving hi to people sitting around us
Singing along with the songs.
Looking from side to side,
Our pediatrition -a child with special needs
who had to carry lil G around and begged to babysit her
the man in charge of the Miracle league sitting next to us
spoke of T hitting 3 home runs at each game
Seeing our previous pastor sitting across the aisle
Talking with him about his new church
and the fact that Lil Gs orphanage Director attends his church
their plans of a missions trip next summer
The family sitting behind us with an adult son with Down Syndrome
picking up the book lil G "accidentally" dropped on the floor.
Two rows in front of me, one of my BFF's who rallied the whole adoption saga
and her friend that has adopted again and again.
Knowing how T's family rallied around us that year and a half wait.
Prayed while we were in Ecuador for 8 weeks.
thinking of another friend who was given the gift of time with her newly married daughter.
The other family in our church with an adult son with Down Syndrome
In ICU all week....... thinking of them
and the value and purpose their son has.
As we sang a worship song
tears streaming down my face
feeling little hand sneaking up into mine
until I could.not.sing.another.word
Feeling so honored
a beautiful community,
captured by grace.
Posted by Anna at 2:06 PM